Coming Darkness has been released!

I am thrilled to announce that Coming Darkness has been released through Creativia Publishing!

Currently, it’s only available as an e-book, but the paperback will be available shortly. I will update here when that happens. 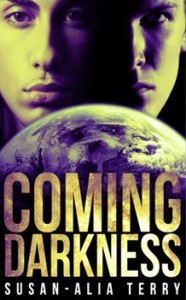 A 900-year-old vampire, a dangerously charming demon, and the Morning Star himself: they are the creatures that haunt human nightmares, but a new threat is coming that even nightmares fear to face.

Kai is having a rough week. His impulsive actions have led to a host of unintended consequences that he would rather not deal with. As a powerful vampire and Lucifer’s lover of many centuries, he views the petty annoyances of supernatural politics as beneath him. The demon Te, always a voice of reason for his less temperate friends, insists that this time he’ll have to play by the rules—and take responsibility for the human woman caught in the crossfire—or face far greater repercussions in the future.

Lucifer, meanwhile, is disinclined to listen when his estranged brothers come begging for his help, preferring the comfortable life he has built with Kai and Te. But when the archangels reveal that their Father is, impossibly, missing from Heaven, he realizes he can no longer ignore the family he walked away from.

Lucifer’s disappearance will cast doubt on everything Kai thought was true, leading him to question a love he thought unshakeable. Little does he know that may soon be the least of their problems.