I let my TiVo collect Outlander episodes since it first aired. Week after week, I wasn’t ready to watch them, and they began to pile up. This weekend I noticed that the first three episodes were scheduled for deletion by Monday if I didn’t watch them. I started to change the “keep until” option until I realized I had no valid reason to keep them other than I was too lazy to watch them. Maybe if “laziness” is the reasoning behind not watching a show, that show should be deleted. Just sayin. 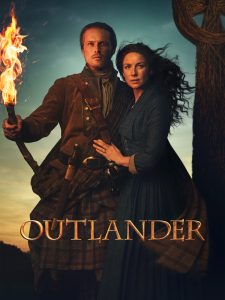 Saturday night, I pushed “play” on the first episode and ended up bingeing on five episodes of Scottish Highland goodness! The show is well written, well-acted, and it feels so authentic. I had a feeling I’d love it from the previews, and I do!

But there’s one problem. One teeny, tiny problem. I feel nit-picky even thinking about it, but it dances around in my head nonetheless. I love Claire, but she’s kind of perfect. Perfect in the sense that her 1940’s life – being a war-time nurse, having knowledge of herbs, having a scholar husband with a specific interest in 18th century Scotland (which he happily shares with her) – makes her a perfect candidate for someone who could survive falling 200 years backwards in time.

If it happened to me I’d be dead within a week, because I don’t know shit, like those kids in Timeline. I feel slightly disappointed because of this. The story was crafted specifically for her – a person with knowledge that would significantly raise her chances of survival – and I kind of wish it wasn’t.

Granted, I’ve been watching a lot of Doctor Who lately. All of the Doctor’s companions are regular people who learn to make their way in the Doctor’s world. Yes, I know that I’m applying a situation that works in one show onto another, and yes I know it wouldn’t work in Outlander. Claire is the heroine and thus must survive the ignorance, superstition, and misogyny of 18th century Scotland. She can’t be “ordinary” otherwise her story would be short and heartbreaking. I think that’s why I’m usually disinterested in stories about time travel to the past. Unless we’re talking pre-Catholic church, I’m pretty much not interested.

That being said, I love the show and look forward to its continued development. Have you seen it or read the books? What do you think?