Sincere thanks to Rollin-Wild.com – I really needed this laugh.

Today is the one-year anniversary of my mother’s transition from this world to the next, and I’m all up in my feelings.

When she passed, so many of my memories of her were tied up in her decade-long Alzheimer’s decline, it was hard to remember her before. Throughout this past year, a bunch of those pre-Alzheimer’s memories resurfaced, leaving me with mixed feelings. Happy to remember the vibrant, funny woman she was, and sad that that woman died a long time ago. 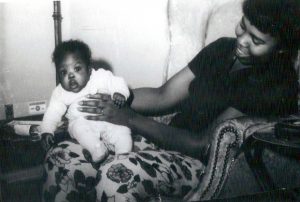 When we’re young, we think we have so much!

When we’re busy, we think we have so little!

All of it is an illusion. All we really have is now.

My family was not a demonstrative family. Growing up, and into my adulthood, there wasn’t a constant stream of “I love you”, something that bothered me immensely 20 years ago. That being said, I don’t remember the last time I said it to her when she actually understood the depth of that feeling. Younger me would probably see that as my biggest regret. But older me – me now – knows that we loved each other, and still do. Constantly saying it wouldn’t make it more true.

It was true in our conversations, in our nightly scrabble games, in our frequent lunches and strolls on the beach and through the mall. It was always there, regardless of whether we voiced it or not.

The regrets I have are more concrete. They’re tied up in the knowledge that passed from the world because I was too busy/lazy/uninterested/felt I had enough time to learn it later…whatever. They’re in every ridiculous excuse I used to not learn all that she had to teach – all that she wanted to teach.

My mom was an excellent cook, baker and seamstress. People requested her food at functions because they knew they could rely on it to be good. As in let’s-squirrel-some-away-to-take-home-because-there-won’t-be-any-leftovers good. As in you-better-have-some-before-we-leave-the-house-because-it-will-be-devoured-when-we-get-there good.

Ain’t nobody asking me to cook anything. Ok? My culinary skills are strictly to maintain life – hear me?

I had my chance.

If I could impart a smidgen of wisdom, it would be this: If your elders are willing to teach you, you have time to learn. You have the time to assimilate their knowledge into your generation and give it continued life.

Just as they did for you.

I’ll leave you with another clip from Rollin-wild.